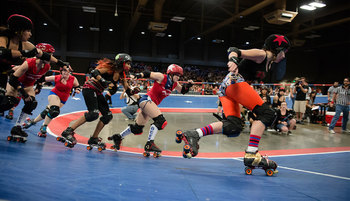 Roller derby got its start in 1935 when Leo Seltzer

got the idea of putting a Depression-era "walkathon" (i.e. prolonged dance marathons, if you've seen the opening of Godzilla vs. the Sea Monster you've seen what they were like) on roller skates. From these humble beginnings he quickly noticed that fans became particularly interested when skaters physically collided. Reducing the distance to be skated increased the skating speed and made collisions more likely, and soon a contact sport was invented. The Seltzer family (first Leo and then his son Jerry) promoted roller derby through thirty-eight years, World War II, the McCarthy Hearings, and numerous other events before the original roller derby league folded in 1973, victim of the 1970s oil crisis.

There were a handful of attempted revivals during the 1980s (RollerGames, more known for the pinball machines based on it) and 1990s (RollerJam), all the while a handful of the original roller derby teams, including the Los Angeles T-Birds and San Francisco Bay Bombers, kept the sport alive on the West Coast.

In the early 2000s, a small startup league formed in Texas, the Texas Roller Derby (whose name, as well as the name of its most popular team, the Holy Rollers, was adapted in the 2009 film Whip It). In 2001, the league split into the banked-track TXRD Lonestars and a second group, the Texas Rollergirls, promoting a new version of the sport: Flat track roller derby.

Freed from the requirement of maintaining an expensive wooden track, flat track roller derby exploded. A skater-oriented governing body was formed in 2004 with a twenty-league United Leagues Coalition organizing in Chicago, which the next year changed its name to the Women's Flat Track Derby Association. WFTDA remains (as of 2015) the highest-level governing body of roller derby in the world. A decade later, "by the skaters, for the skaters" remains the credo of the roller derby movement.

The Least You Need to Know

At its most basic, roller derby is a contact sport played on an oval track by 10 players on quad-style roller skates (the kind with wheels positioned like on a car), 5 on a team, in discrete plays of two minutes or less called "jams." During a jam, both teams have the opportunity to score points by having one player on each team race each other in an attempt to repeatedly lap everyone on the other team, while the remaining players attempt to stop the other team's scoring player and assist their own. Jams are played during defined periods, the most common period lengths and numbers are 4 10-minute periods (the original game as defined by Leo Seltzer and Damon Runyon), 2 20-minute periods (the original WFTDA game length) or 2 30-minute periods (most rule books as of 2015).

The on-track positions in roller derby are:

One of the features that distinguishes the modern roller derby revival from previous versions of the sport, scripted or unscripted, is the presence of fanciful, self-chosen names for skaters. The tradition of derby names started because one of the skaters of the original Lonestar Rollergirls was an abuse survivor who wanted to adopt a tough nom de guerre for herself, and the other members of her team also chose names as a gesture of solidarity. Though sometimes criticized, the tradition of derby names has stuck around and shows no sign of disappearing, though greater numbers of skaters are using their legal names for interleague play. Though there's no technical copyright for derby names, it's highly encouraged to use an online database to search existing roller derby names to make sure there are no copies.

The current codes of Roller Derby are