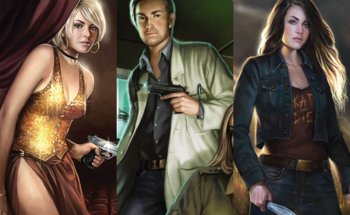 Cryptozoology runs in the family. Literally.

InCryptid is an Urban Fantasy series by Seanan McGuire, author of the October Daye series. She also writes the Newsflesh and Parasitology series as Mira Grant.

The creatures known as cryptids are real, and have shared the earth with mankind since time immemorial. For centuries, a religious order known as The Covenant of St. George has been defending and protecting unknowing humanity by slaying cryptids wherever they encounter them. But a schism occurred in the ranks, and one Covenant agent and his wife left the order, never to return. They and their descendants, now hunted by the Covenant, dedicated their lives to studying cryptids, learning their ecological purpose, and only harming them when no other method of dealing with their presence would work.

The Healy and Price families operate with the knowledge that the Covenant considers them traitors and wants them dead. The worldwide cryptid community is aware that the families are no longer Covenant — but they are not uniformly convinced that it isn't a trick. Consequently, the family must train to survive both the cryptids who don't trust them, and the Covenant who still think of them as filthy traitors.

The youngest generation of the Price family consists of Alex, zookeeper; Verity, who wanted to forego the family business and be a ballroom dancer; Antimony, still studying; Arthur, reclusive part-incubus geek boy and researcher; Sarah, babysitting Verity; and Elsie, who isn't really a cryptozoologist but is still held to the family code of conduct. Their parents, aunts, uncles, and assorted cousins, both biological and adopted, human and not, operate as support and information network.

Now has a character page. Please put character-specific tropes there.

The series so far (in chronological order for the storyline) consists of:

open/close all folders
Advertisement:
Jonathan and Frances
Alice and Thomas
The Price Family
The Cryptids

Cryptid, noun:
1. Any creature whose existence has been suggested but not proven scientifically. Term officially coined by cryptozoologist John E. Wall in 1983.
2. That thing that's getting ready to eat your head.
3. See also: "monster."
Sarah: You know he doesn't like me that way.
Antimony: I know he does. Everyone in the family knows he does. Even Alex knows, and Alex is both a boy and currently in Ohio. Sarah, people who have never met either one of you know he does—they can see it in his forum posts.