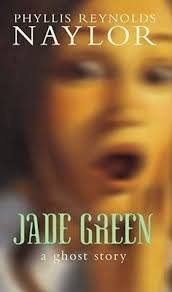 Jade Green is a horror story by Phyllis Reynolds Naylor.

In the book, a fifteen year old girl by the name of Judith is forced to live with her uncle after she finds herself orphaned by her parents. He tells her about a girl by the name of Jade Green, who had committed suicide earlier by chopping off her hand. She also meets her creepy cousin Charles, and the miller's son Zeke, the latter of which she falls in love with.

After she brings something green to the house (which Uncle Geoffrey had told her not to do so), Jade Green ends up haunting the house.