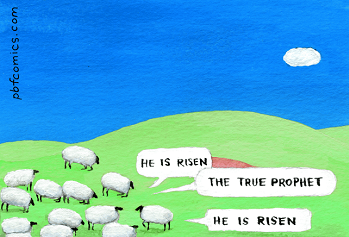 Uhh, that's a cloud.
"In the Hour before time began, Meerclar Allmother came out of the darkness to the cold earth. She was black, and as furry as all the world come together to be fur."
— Tailchaser's Song
Advertisement:

As far as science can tell, the only modern species that has a concept of religion are humans. In fiction, however, a common way to anthropomorphise Nearly Normal Animal to Partially Civilized Animal characters or — depending on what the work in question is about — flesh out their culture is to have them have their own gods and faiths. Like a Fantasy Pantheon, whether or not animal-worshiped deities or faiths are encountered, or are real, depends on the work.

Not to be confused with animals which believe in a human religion (some examples of this may go to Fantastic Religious Weirdness).

Compare to Robot Religion, for when it's intelligent machines that have their own unique religions.