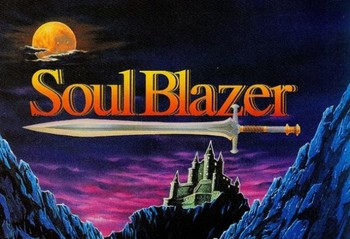 SoulBlazer, known in Japan as Soul Blader, is a Super Nintendo Entertainment System console role-playing game developed by Quintet and published by Enix (now Square Enix). SoulBlazer was released on January 31, 1992 in Japan, on November 27, 1992 in North America, and on January 27, 1994 in Europe. Similar to the company's previous game ActRaiser, the player takes the role of a divine angel/lesser-deity/avatar, sent by a divinity called the Master to rebuild a ruined world. SoulBlazer was scored by Yukihide Takekawa.

According to the game's Backstory, a greedy king made a Deal with the Devil, gaining the power to exchange the souls of living things for gold coins. As the king's treasury grew, the population decreased until practically nothing was left alive. That's when the Master sends his servant Blazer on a mission to destroy monsters and release the captured souls of a world's inhabitants. Blazer is armed with a sword and has the ability to speak with any living thing and be understood. He battles the hordes of Deathtoll with the assistance of his Soul helpers.

It was followed up by two spiritual successors, Illusion of Gaia and Terranigma, which are unofficially considered part of a trilogy.