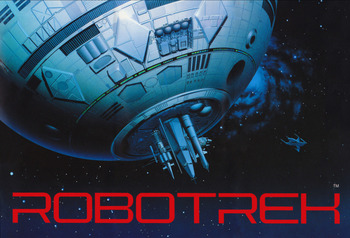 Mons are cool. We know this. But what about robot mons combined with humor that pokes fun at the RPG genre? This is the basic premise of Robotrek, known as Slapstick in Japan, released for the Super Nintendo Entertainment System.

It tells the tale of the young son of Doctor Akihabara, whose family has just moved to the village of Rococo. All is not well in the world as the Hackers are trying to take over the world with robots, and it's up to this young lad to stop them with his robotic servants that he himself made, called "Robots".

Though the "Save the World" plot didn't blow many minds, Robotrek's gameplay was a refreshing change of pace. The game includes a great deal of Character Customization for a Super Nintendo RPG, and the combat is an odd hybrid of real-time and turn-based gameplay. Unfortunately, the level of customization can be daunting; a poorly-specced robot makes the game much more difficult than it already is. Additionally, like most Japanese RPGs before Final Fantasy VII popularized them in the west, it suffers from a sloppy translation. The game is still a worthy addition to any retro gamer's library.