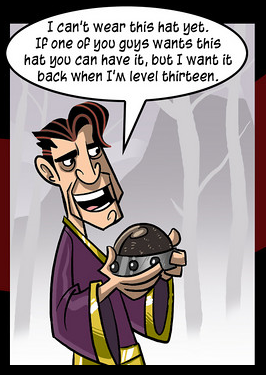 In games like MMORPGs, powerful items (looted or not) often come with additional character requirements that must be met before they can be used. These requirements—which can include level, class, stats, fame, and even karma—prevent players from purchasing massively overpowered gear and spoiling the challenge, and as such are the bane of the Munchkin.

Games with these do generally have a few rare and powerful items, which may actually be more powerful than a higher-level but more common item. The Infinity -1 Sword will almost certainly be such a weapon, although the Infinity +1 Sword is more likely to be "honest". Such items are generally denoted with odd-colored flavor text or some similar effect.

A game-specific subtrope of Phlebotinum-Handling Requirements, and a form of Double Unlock unless the loot is received at the start of the game. Compare with Power Equals Rarity, Stat Sticks, Arbitrary Equipment Restriction & You Have Researched Breathing. See also Class and Level System, An Adventurer Is You, and Infinity Plus/Minus One Sword. Not to be confused with Awesome, but Temporary, which is loot that's only accessible in a specific segment of the game.

Note: Since this is such a common trope, please only list aversions, subversions, or interesting variants.