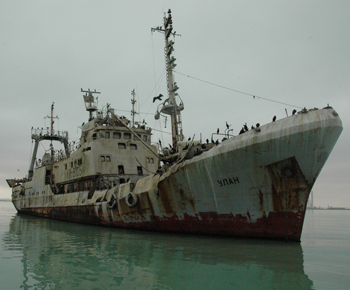 This article is about the trope. For the film, go here.

The main characters receive a Distress Call or randomly come across a (seemingly) deserted vehicle and have to figure out what happened and where everybody went. Usually they run across exactly what happened when it tries to eat them. A Big Dumb Object may be involved. And sometimes there are actual ghosts.

Fantasy settings that include undead are likely to feature one of these at least occasionally. In these cases it's not always a mystery how the ship has gone so long without foundering or running aground... just because there's no living crew doesn't mean there's no crew at all, and the "ghost" descriptor may prove very literal.

If you're looking for otherworldly ships with tattered sails crewed by the damned, see Flying Dutchman. For other forms of supernatural transportation, see Ghost Train. A potential archetype found in this setting might be a Creepy Old-Fashioned Diving Suit.

See also Send in the Search Team and Late to the Tragedy. Not related to shipping two dead characters.