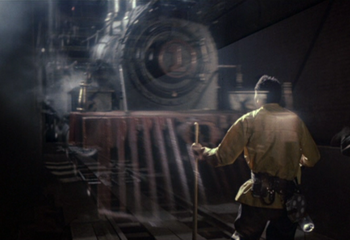 "What a glorious night for me to bring the fright!"
"And every year on the date of the accident, it runs again as a warning to others, plunging into the gap, shrieking like a lost soul!"
— Thomas & Friends
Advertisement:

Although trains are usually seen as fun and lovable machines, they can be used for sinister purposes too. A Ghost Train is a train that has supernatural qualities, and is usually used to carry around ghosts or other monsters, scare people, or for other creepy purposes.

This trope, often seen in folklore, usually takes the form of an old steam train with a dark, twisted appearance. It may be inhabited by a ghostly conductor and passengers, and it may have been either created by the ghosts, or a normal train that they possess for their own ends. Alternatively, the train itself may be fully sentient.

It may often be seen in kid friendly works, especially those with Defanged Horrors, because in a way, it replaces the more conventional fun that trains bring with a more spooky sort of fun.

May be part of a Circus of Fear, or even just associated with Creepy Circus Music.

Compare Ghost Ship and Sinister Subway. See also Afterlife Express, which is for spirits going to the afterlife instead of staying on Earth, and may be more benevolent than this trope.