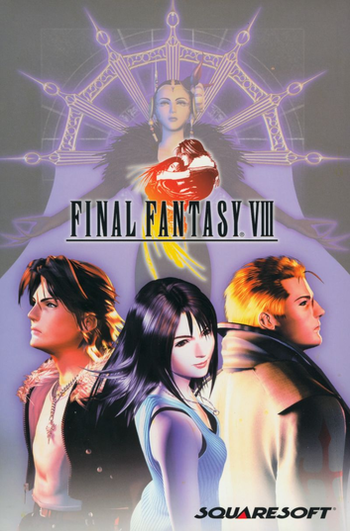 I saw you smiling at me
Was it real or just my Fantasy ♫
"Like you've been preaching, it would be wonderful if things could be settled by discussion. The only problem with that is that it takes too much time. Especially if the others are not willing to listen. So I believe that fighting is inevitable at times. It's really sad. That's all I have to say. I hope you understand someday. I think the world needs both people like you and people like us."
—Squall
Advertisement:

The eighth main entry in the break-dancingly popular Final Fantasy series, released in 1999.

Squall Leonhart attends an Elaborate University High known as a Garden. The organisation who run Balamb Garden, SeeD, take in pre-pubescent orphans and train them to become soldiers, requiring them to graduate before their twentieth birthday.

Squall (he's "more complex than you think"!) is an unflappable agent with more issues than National Geographic. He's the best at what he does, but his personal life is effectively zero, and he shuns the companionship of others. During his first mission as a SeeD, he's deployed to lend aid to a resistance movement fighting the expansionist nation of Galbadia. There he meets his opposite: Rinoa Heartilly, an Uptown Girl naive to the realities of battle. The cold war heats to a boil with the emergence of a mysterious new figurehead named Edea who unravels the secrets surrounding SeeD's unstated mission.

VIII deals with the conflict between childhood and being forced to "grow up", and the nostalgia for a simpler past and the fear of an uncertain future that goes hand-in-hand with that. The main characters were taught from a young age to suppress their emotions and free will for the sake of the mission, and even had their memories erased in some cases. Unfortunately, human emotion cannot be repressed so easily. The other theme, the one used for marketing, is love. In addition to various couples, the bonds between parents and children are examined, as well as between friends and siblings.

On a cosmetic note, this is where Final Fantasy began to eschew the super-deformed characters traditionally found on overworlds and battle screens, paired with sophisticated animations, Motion Capture and cinematography starring their (at the time) photorealistic renders. Additionally, Square took the localisation process much more seriously: The company hired translators (both for English and the other European languages) to work alongside the Japanese development team as the game was being created, which is now pretty much standard procedure for Final Fantasy translations. Finally, the in-game technology is on par with modern-day Earth: Squall pockets an hourly wage instead of killing monsters for gold (you get a raise for passing SeeD exams), can rent cars along with chocobos, post on internet forums, read magazines to glean protips (seriously) or learn new moves, and play a Card Battle Game. The characters are more grounded than the previous ones, the fantasy elements are either toned-down or explained away with technobabble, and the world is not too different.

VIII took some major liberties with gameplay. Most JRPGs have separate systems that determine Character Levels, Equipment, Spell Lists, and so on. VIII replaced all of it with Summon Magic (here known as Guardian Forces, or "GFs"). Try to follow us here:

Additionally, no equipment can be found. Characters can upgrade their weapons with magazine articles and items, but no other gear can be equipped whatsoever. Modern Final Fantasy games continue to tinker with the "no armor" approach, most notably X and XIII. On a minor note, monsters use Level Scaling to beef up relative to the party average, which makes Level Grinding no longer a viable way to overcome challenges—though the time spent on Drawing magic can balance that out, and more. The upside is that the player has granular control over the difficulty level, making this one of the easiest sequels with which to Enjoy The Story, Skip The Game, or (conversely) attempt a Self-Imposed Challenge.

A huge part of the game is Triple Triad, the collectible card game played by NPCs in every town. It was so popular in and of itself that it inspired a real-life version, and later a Spiritual Successor called Tetra Master in Final Fantasy IX and XI. Triple Triad was also added to Final Fantasy XIV by popular demand, and it plays pretty much the same way, but without the item refinement and adding some new rules. It is also available on smartphones, though under the guise of the "Final Fantasy Portal" app.

Originally released on PlayStation, the game was later ported to PC in 2000, and the original version was released on the Play Station Network for the PlayStation 3, PlayStation Portable, and (later) Play Station Vita in 2009. The PC version later got a Steam re-release on December 5th 2013. An updated port for PC, PlayStation 4, Xbox One, and Nintendo Switch titled Final Fantasy VIII Remastered came out on September 3, 2019, marking twenty years since the original came out.

Example of:
Hope Is Scary