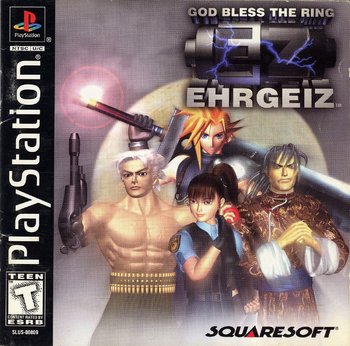 Ehrgeiz: God Bless The Ring is a Fighting Game developed by DreamFactory and published by Namco and Square in 1998, the title being German for "ambition". Unlike most Fighting Games, especially at that time, Ehrgeiz allowed full 3D movement around an arena which often had several levels and/or obstacles - in fact, the Super Smash Bros. technique took notes from this game a year before its existence.

Ehrgeiz is noted for playing off of the astounding success of the then-recently-released Final Fantasy VII by having a slough of cameo characters from that game. The original arcade release had Cloud and Tifa as secret characters named "Guardian" and "Summoner" which could be fought by beating the first X characters in a certain amount of time. They were playable after one or two months of real time. In addition, the final boss, Django, bears a striking resemblance to Red XIII.

Ehrgeiz was later ported to the Sony PlayStation and increased the cameo characters to include Sephiroth, Vincent, Yuffie, and Zack. The PSX version included mini-games, as well as a brand-new Quest Mode, which was a sort of RPG-Lite (as shown in DreamFactory's previous Tobal 2) starring two side characters and invoking many Final Fantasy VII mainstays including materia. Many of the RPG section's game mechanics were later re-used in Vagrant Story.

The real fun of the game, though, probably lies in getting Sephiroth to lie face down in the sand waving a little flag above his head for winning a shirtless beach race.

Not to be confused with the 1997 anime series of the same name.