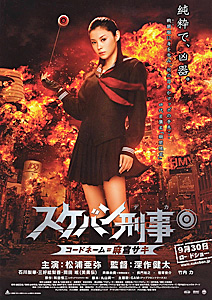 Our heroine, Saki Asamiya, is an incarcerated juvenile delinquent whose mother is an incarcerated criminal herself. One day, Saki is recruited from prison by the government and is allowed freedom if she agrees to become an undercover cop for them. She very reluctantly complies and, with her Killer Yo-Yo, is sent to curb crime activity in high schools across the country.

The manga was serialized in Hana to Yume from 1975 to 1982, and compiled into 22 volumes. It was adapted as three live-action series from 1985 to 1987 (along with two feature films) that became a ratings phenomenon in Japan. It also received a Truer to the Text OVA in 1992, and a third feature film came out in 2006 (released stateside as Yo-Yo Girl Cop).

Nearly a decade after Wada's passing in 2011, two new Manga series based off Sukeban Deka are currently being serialized on monthly magazine Princess

:The Sukeban Deka Who Leapt Through Time (Toki wo Kakeru Sukeban Deka), and Re:Sukeban Deka. The former takes place in the the present while the latter is a remake of the original story. About seven months later in the same year, a third Sukeban Deka Manga Spin-off titled Sukeban Deka Pretend

has started serialization in the same Magazine as the aforementioned spin-offs.

The series takes place in a shared universe with other works by Wada, most notably Dai Tobo, Super Girl Asuka and Kaito Amaryllis, the latter of which serves as a sequel of sorts to Sukeban Deka.