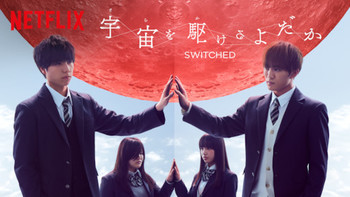 No matter how you looked, I'd know. Because you are who you are.
—Kaga, "Suicide"
Advertisement:

Switched is a Netflix original based on the manga Uchuu wo Kakeru Yodaka by Shiki Kawabata. Its first season aired in August 2018.

Right before going on her first date with her class's top athlete, Ayumi gets a call from the least popular kid in her class, Umine. Following this phone call, the two girls switch bodies and Umine-as-Ayumi goes on said date while Ayumi-as-Umine spends the night in the hospital. The rest of the first season follows Ayumi's attempts to get her own body back, though Umine is dead-set on keeping her popularity and new boyfriend. By the end of the first episode, though, one of Ayumi's closest friends (Kaga) figures out that the two have switched.

The story surrounds not only Ayumi's living in Umine's body but also Umine's decision to spitefully stay in Ayumi's body.