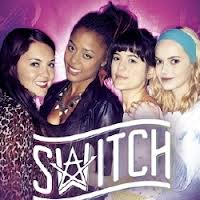 The Witches of Camden
Advertisement:

Unable to get a job? The bloke you fancy isn't interested? Microwaved your boss's cat?!! Well, no problem... if you're one of the four Camden Witches, the protagonists of light-hearted supernatural drama series Switch. Broadcast for one series of 6 episodes on ITV 2 between October and November 2012, Switch follows the lives and loves of the so called Camden Witches. Sadly it was confirmed shortly after the first series ended that it would not be coming back for a second series. Stars Lacey Turner, Phoebe Fox, Nina Toussaint-White and Hannah Tointon as the four witches.