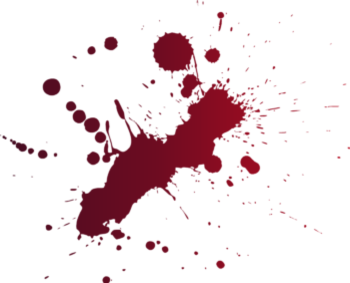 Use your imagination.
Image

Blood or brains are seen splattering against a wall and the rest is left to the imagination.

Most often used with women and children, because it's more okay to hurt men in Hollywood, but available for everyone to control the tone/rating of the work. Often found in the form of a Reaction Shot as the reacting characters' expression (or lack thereof) can serve as a commentary on the action, the character, or the world they inhabit. Sometimes combined with Blood-Splattered Innocents, as the gore splatters on or near them.

A Japanese variation of this trope involves seeing the silhouettes of the participants from behind a translucent washi screen, typically a shoji sliding door, on which the blood gets spattered. The form has since been widely adopted by the west and is often used to give a sense of art. A similar variation is to have the splatter hit the other side of a pane of glass or a window. Another variation shows blood seeping out under a door, through an opening or across a sill or a threshold to imply that violence has occurred on the other side.

A Gory Discretion Shot can serve to keep the rating PG-13 to reach a wider audience. It may also be done for budgetary reasons: red-dyed corn syrup splashed over a window: cheap. Showing someone's head explode: expensivenote Although Scanners managed an effective budget version by filling a rubber head with chicken giblets and blood and firing a shotgun at it from below and behind. Still more expensive than the syrup/dye, though. Note that it could also be done to keep the truth hidden from the viewer. Showing the murder in question straight out, so the viewers can see the culprit, doesn't make a good murder mystery in most shows or movies after all.

Combine it with Bloodless Carnage, and you get the Sound-Only Death — the audience hears the gunshot and the body hitting the deck, but what they see is (for instance) the victim's hat falling to the ground with a hole through it. Or the killer walks through a door and we hear gunshots and screams after it closes behind him. Also crosses paths frequently with Scream Discretion Shot.

A related trope is the camera cutting away when things get nasty. Say if someone is getting whipped, we'll only see their face contorting in pain. Alternately, a cut similar to a Screamer Trailer may be used, showing a split second worth of the carnage. In the same vein, the aftermath of murder may be demonstrated minimally with a Dead-Hand Shot, hopefully one still attached to the body.

Contrast Gorn. Compare and contrast Battle Discretion Shot and Nothing Is Scarier; though this may be less "scary" than not showing anything at all in a less overtly violent work, in splatter works this can be used for horror—with all this overt violence running around, what is so horrible you don't get to see it...? See also Empathy Doll Shot and Pink Mist. May precede a Mortal Wound Reveal, especially if it's unclear who exactly got injured—note that this is a Subversion of sorts, when it does happen.

Mecha Sonic is the strongest of the Metal Sonic robot line, and also the cruelest. The first thing he does upon reaching the Mushroom Kingdom is murder an innocent Goomba for a Chaos Emerald.

Mecha Sonic is the strongest of the Metal Sonic robot line, and also the cruelest. The first thing he does upon reaching the Mushroom Kingdom is murder an innocent Goomba for a Chaos Emerald.