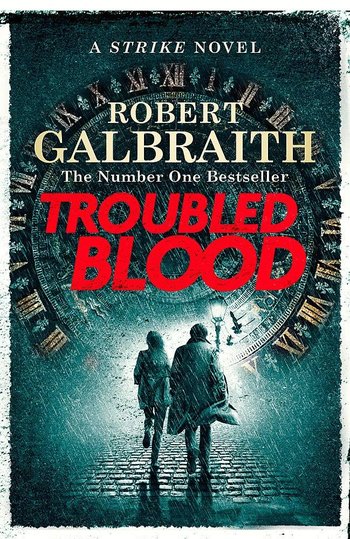 Troubled Blood is a 2020 mystery novel by J. K. Rowling, writing under her Moustache de Plume "Robert Galbraith". It is the fifth novel in her series about one-legged private detective Cormoran Strike.

The plot takes place over more than a year, August 2013 - November 2014. Robin Ellacott has now joined her former employer, Cormoran Strike, as a fellow private detective and partner in his firm. Both Robin and Cormoran are dealing with problems in their private lives. Cormoran's Aunt Joan, who was a steady and dependable mother figure for Cormoran throughout his childhood (as opposed to his mother Leda, a rock groupie), is terminally ill with cancer. Robin for her part is going through a protracted divorce from her husband Matthew, one which should be easy as they have no children and few joint assets, but which Matthew is prolonging out of sheer spite. Other complications include Cormoran's neurotic, unstable high-society ex-girlfriend Charlotte, who keeps texting him despite now being a married mother of two, and Saul Morris, an investigator for the detective agency who keeps up a mild but unmistakable campaign of sexually harassing Robin.

One evening when Cormoran is in Cornwall to visit his sick aunt, he is approached by a 40-year-old woman named Anna Phipps. Anna tells him that she is the daughter of Margot Bamborough, a doctor who disappeared without a trace in October 1974, when Anna was just one year old. Margot left her practice one rainy night to meet her friend at a pub, and was never seen again. She is thought to have been a victim of Dennis Creed, a serial killer who was active in the area at the time and who was caught a couple of years later, but no trace of Margot was found in Creed's lair and Creed never admitted to the crime. Anna wants answers, hoping to find out who killed her mother, and where the body is. Despite his reluctance to take a four-decades-old cold case, Strike accepts the challenge.

Meanwhile, there is the continuing theme of Cormoran and Robin's Will They or Won't They? relationship with each other, and the question of whether they'll ever get together or let their fears and insecurities keep them apart.