Western Animation / The Adventures of Ichabod and Mr. Toad 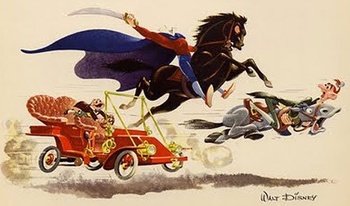 Promotional Art Always Lies: No scene like this actually takes place in the film, much as one might wish it had...
"Three of the world's greatest story-tellers... Walt Disney, Bing Crosby, Basil Rathbone... bring you two of the most fabulous characters ever screened!"
— Trailer
Advertisement:

Released in 1949, The Adventures of Ichabod and Mr. Toad is the 11th film in the Disney Animated Canon, and the last of the six (or seven, if you count Fantasia) "package films" created by the studio in the 1940s before they returned to full-length feature animation with Cinderella. Like Fun and Fancy Free, it is a collection of two short films, bundled together to make one feature-length movie. Despite the title, the two eponymous characters' stories — which have nothing to do with one another — are actually presented in the reverse order:

Unlike most other Disney animated features from before the age of home video, this was never given a theatrical re-release. The two shorts are seen apart in individual collections more often than they are together in their original package film form.

Nowadays, the film is probably best known for the fact that the Mr. Toad portion inspired "Mr. Toad's Wild Ride" at the Disney Theme Parks.

"Well, guv'nuh, you tried to sell me a stolen motorcar".

"Well, guv'nuh, you tried to sell me a stolen motorcar".