Take Our Word for It 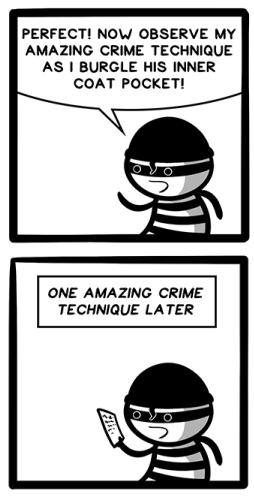 Now observe my amazing captioning technique as I write a witty, compelling caption for this image!
"Uh, remember us? The audience? Can we see it, please?"
— Tom Servo, Mystery Science Theater 3000: Pod People
Advertisement:

When something is supposed to be breathtakingly good or astonishingly bad — such as a really moving poem or a really hideous person — a frequent strategy is to not show or describe it at all, to instead give us only the characters' reactions. This allows the audience to imagine exactly how good/bad it is, manipulating their emotions indirectly and relying on their minds to create something more effective than an actual example. It can come across as a violation of Show, Don't Tell if it is used poorly, and there's always the risk that The Reveal later on will be terribly underwhelming in the face of all that build-up, resulting in Humor Dissonance and/or Narm.

A staple trope of comedy and horror genres, albeit for different reasons. In comedy, often the humour revolves around the characters' reactions instead of the item itself, such as their exaggerated disgust over something that couldn't possibly be that bad. In horror, this takes advantage of Nothing Is Scarier, fear of the unknown creating greater fear than actually showing the horrible thing, and a character reacting with terror at some unseen menace or horrific scene helps the audience to internalise that character's emotions. This can also be invoked in works — especially those which are "family-friendly" that wish to portray something in the story that could offend their target audience, so, in order to keep the show from being too salacious, if a scene is extremely disgusting or lewd, all we'll get is the characters describing it (or just their reactions) instead of actually seeing the scene play out.

Smells and tastes are a common form in visual media, as the audience has no other way to detect these aside from character reactions. Literature doesn't have this limitation, although as everything needs to be described anyway it's usually less overt. This trope is relatively common in visual novels and games with such a storytelling, as action is often shown by the character sprites sliding across the screen and the description of their actions instead. Often, critical scenes are shown through static images of the impact.

This trope is Older Than Feudalism, dating back to The Iliad where Helen is never fully described, especially by the standards of the rest of the work which has long, detailed descriptions of just about everything.

See also Brown Note, Undisclosed Funds, Hiroshima as a Unit of Measure, Unseen Evil, Noodle Incident, Informed Attribute, Orphaned Punchline, Lost in Transmission, You Cannot Grasp the True Form, You Do Not Want To Know, Head-Tiltingly Kinky, Offscreen Afterlife, Offscreen Moment of Awesome, Narrative Profanity Filter, Nothing Is Scarier. Compare Showing Off the Perilous Power Source, where the characters are the ones who can't have the direct experience; Great Offscreen War, where a vast budget-busting world-changing war is only obliquely referred to as Backstory; and Obscured Special Effects, where the special effects assets are partially concealed to prevent budget-busting.

Alternative Title(s): Take My Word For It