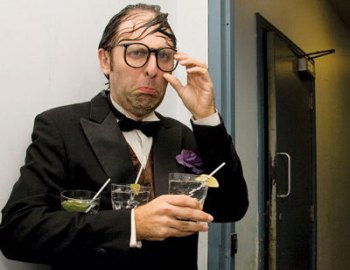 Stand-Up persona of Australian musician Gregg Turkington. One of the pioneers of Anti-Humor, you can compare him best to the foul mouthed audience insulting persona Tony Clifton done by Andy Kaufman. Anti-comedy relies on people doing unfunny things to funny effect; Hamburger employs outdated ex-wife and "Why did the chicken cross the road?" jokes with abysmal timing.

Something of a regular on Tim and Eric Awesome Show, Great Job!. Tim & Eric were thinking of making a Game Show parody starring him called The New Big Ball, but the project was kiboshed by the Adult Swim execs. The pilot episode is available here

His act includes examples of: