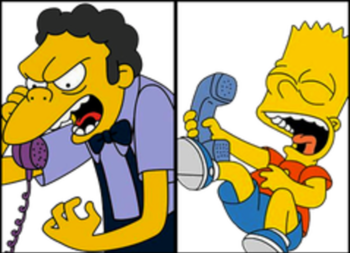 "Listen, you lousy bum. If I ever get a hold of you, I swear I'll cut your belly open!"
Geula Cohen: You're listening to the Voice of Liberating Zion for the Freedom of Israel. We have a special guest in our studio today, Aharon Aharon.
Aharon Aharon: Good, good, you're the best, Geula, the best!
Geula Cohen: Yes. Soon, we'll tell our listeners about the prank call you made to the British High Commissioner [of Mandatory Palestine].

Aharon Aharon: Oh, yeah, you would not believe it - I called him to ask what color is the White Paper of 1939! *canned laughter*
— The Jews Are Coming

The Prank Call trope is where a character decides to prank another by calling them on the telephone. These pranks are mostly just jokes and puns. The most popular joke used when prank calling someone is "Is your refrigerator running? You'd better catch it!" Punny Names are also popular, especially when calling a person who then has to ask for the punny-named person, leading to awkwardness such as "I'm looking for Amanda Huggenkiss."

For amateurs, at least, this has been made largely extinct in Real Life because of caller ID and call-blocking features that allow telephone users to block calls from "Private"/"Unavailable"/"Unknown"/"Restricted" phone numbers (and thus averting potential for a Prank Gone Too Far). Prank Calls are usually considered a form of Harassing Phone Call. Though the trope does live on for call-in talk shows and similar, where the caller doesn't care if their ID is known and often prank callers are seen as All Part of the Show.

(The two most common prank calls, as implied above, are "Do you have Prince Albert in a Can?" and "Is your refrigerator running?")

In some countries, making what are termed "nuisance calls" is illegal and can lead to either criminal or civil prosecution.

Not to be confused with Phoney Call which is where a character pretends that they are talking on the phone when the phone is off.

Contrast Mistaken for Prank Call (the Subverted Trope) when the character receiving the call thinks that they're being pranked.