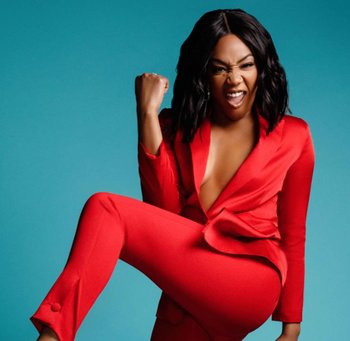 Haddish is best known for her breakout role as Dina in the 2017 comedy Girls Trip, which garnered her widespread acclaim in the entertainment industry and prestige similar to the kind future co-star Melissa McCarthy received for Bridesmaids in 2011. For her performance in Girls Trip, she won a handful of critics' awards, with many believing she was even worthy of an Oscar nomination. Less than a year after Girls Trip, she'd already nailed hosting stints for Saturday Night Live (coincidentally, Haddish auditioned for the show when, during its 39th season, the show received complaints that it hired too many white people and hadn't had any black female cast members since Maya Rudolph left the show in 2008) and the MTV Movie Awards.

Prior to her breakthrough in Hollywood, Haddish worked in the entertainment industry for over a decade, mostly taking minor roles in film and television. From 2015 to 2017, Haddish starred as a regular on NBC's The Carmichael Show, and she appeared in the 2016 Keegan-Michael Key / Jordan Peele vehicle Keanu. She also portrayed a race-switched version of Phoebe Buffay in the Jay-Z music video for "Moonlight".

In 2019, Haddish starred in a variety of high-profile projects, including the aforementioned mob drama The Kitchen (based on the Vertigo comic book of the same name) opposite the aforementioned McCarthy as well as Elisabeth Moss, and The LEGO Movie 2: The Second Part. She also explores new ground in her first regular hosting gig, for an all-new Kids Say the Darndest Things. As of 2022, Haddish also stars in the Apple TV+ mystery comedy The Afterparty in the lead role of Detective Danner. A second season has been ordered and she is expected to return.

Haddish is also a published author. Her memoir, The Last Black Unicorn, was released in 2017.