Film / A Corner in Wheat 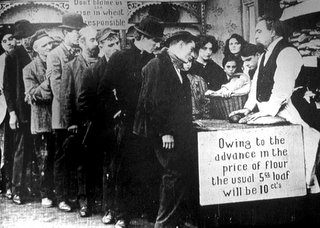 A Corner in Wheat is a 1909 short film by cinema's first great director, D. W. Griffith. This 14 minute film (typical length for a feature of the day) depicts the results of a scheme by an unscrupulous financier to corner the wheat market. The financier makes an enormous fortune while inflicting misery on both the poor farmers who can't sell their wheat at market and the urban poor who can't afford to buy bread.

A Corner in Wheat was a notable turning point in Griffith's artistic development and a harbinger for greater triumphs in years to come. It is generally regarded as his first major work. Its sophisticated editing (even today) and complex melding of different locations and storylines into a single whole greatly inspired the montage effects of the Soviet film theorists such as Pudovkin and Sergei Eisenstein. It was inducted into the National Film Registry in 1994.