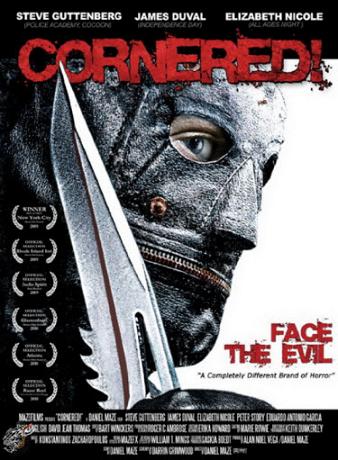 Bring out the gimp.
When you wish evil on someone... evil might be listening.
Advertisement:

In the fall of 2008, the city of Los Angeles finds itself gripped with terror as a Serial Killer runs amok during the night, his MO being to break into mini marts, liquor stores or gas stations after hours and viciously torture-murder any employees still inside, taking the security tapes afterward to help him relive his crimes over and over again. In a desperate bid to catch this ruthless maniac, the mayor's office puts out a reward of half a million dollars on his head; and that's where our story begins, in a small corner store where the deliveryman, Morty, sparks a discussion among the friends inside about what they'd do if they caught the Convenience Store Killer (hereby known as CSK for simplicity's sake). Disembowelment, stabbing, eye gouging, and beheading are all suggested by the main players, who are listed below:

After the discussion, a suspicious man goes running out of the store, but the group think nothing of that, believing he was just a simple shoplifter. After Morty leaves, the place is closed down, and everyone heads up to Steve's apartment for poker night, Jess having been convinced to stay by Donny; Jimmy is also forced to participate by his uncle, who wants to keep an eye on him, essentially nailing him to the wagon. As the night drags on, it becomes apparent that Steve's place is CSK's latest target. After disposing of Jacko, a vagrant who lives in the alleyway behind the store, the gimp-masked maniac somehow gets inside, and begins whittling down the five main characters, in exactly the same way they said they'd off him.

In essence, it's essentially a sleazier, smaller scale version of Intruder.

If you're heading out to the corner store, remember to pick up the following: