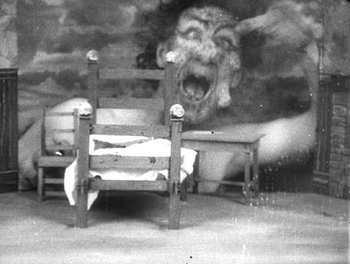 The Haunted Hotel; or, The Strange Adventures of a Traveler is a 1907 short film (six minutes) by stop-motion animation pioneer J. Stuart Blackton.

The short opens with a shot of a house. Storm clouds pass and lightning cracks. Witches fly across the sky on bromsticks. The trees start to dance, and suddenly the front of the house becomes a leering, grinning face.

Cut to a traveler arriving at a "hotel" which appears to be only a single cabin. He sets down his bag and tries to enjoy a meal, but all sorts of bizarre things happen. The table moves. The furniture moves. Ghosts appear and disappear. The dinner serves itself, with a knife floating in midair slicing meat. The whole room starts to tilt back and forth...