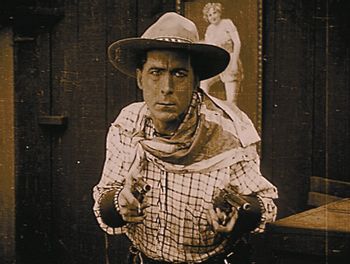 Hell's Hinges is a silent film from 1916 directed by Charles Swickard and starring that most famous of silent-era cowboys, William S. Hart.

The Reverend Robert Henley is sent out to the Wild West town of Placer Center, better known as "Hell's Hinges", with his sister Faith accompanying him. Rev. Henley was strong-armed into becoming a man of the cloth by his mother and has little interest in his job, but Faith is a true believer.

Hell's Hinges would be a tough challenge even for a parson who was serious about his job, as it is an out-of-control center of crime and violence ruled by Silk Miller, who owns the dance hall and has no interest whatsoever in any moral reform in his seedy town. Gunfighter Blaze Tracy (Hart) has been called into town by Miller to help throw the do-gooders out. Tracy sums up his philosophy as "shoot first and do your disputin' afterward", but one look at pretty Faith and he falls in love. One talk from Faith and Tracy finds religion, too.

Unfortunately, Rev. Henley goes in exactly the opposite direction. Tempted by one of Miller's prostitutes, he sleeps with her, drinks himself into a stupor, and misses his own church service. Tracy leaves to get help for the drunken reverend, but while he's gone Miller and his goons burn the church down. Rev. Henley, who joined the mob setting fire to his church, is gunned down in the crossfire. When Tracy returns to find the church burning to the ground and Faith cradling her dead brother's body, he goes on a mission of revenge.

Hell's Hinges has a cynical take on the Wild West that was well ahead of its time in 1916. The scene at the end where Tracy goes into the bad guy bar is rather reminiscent of the climax to Unforgiven some 80 years later. Hell's Hinges was one of Hart's most popular films, and is one of two William S. Hart films on the National Film Registry. John Gilbert made his film debut as an extra.