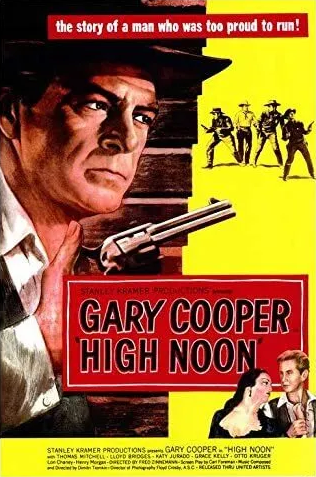 "People gotta talk themselves into law and order before they do anything about it. Maybe because down deep they don't care. They just don't care."
— Martin Howe
Advertisement:

Fred Zinnemann's High Noon (1952) is one of the most famous Western films ever released, in spite of — or perhaps because of — the fact that it averts and even subverts many of the genre's conventions; in some ways it's really a gentle deconstruction of the Western, depicting a hero mired in moral complexities rather than the simple, black-and-white clash between "good guy" and "bad guy" traditional to the genre.

The actual plot is rather simple: Will Kane (Gary Cooper), the town marshal of Hadleyville, New Mexico, is planning to retire and live happily with his new bride Amy (Grace Kelly), two sure signs of impending doom. On his last day the whole town learns that Frank Miller (no, not that one), a criminal Will had sent to prison some years earlier, has been released and will be arriving on the noon train with his gang, looking for revenge. Will seeks support from the townsfolk, but none of them will stand with him, not even his deputy. Amy, a pacifist, urges him to leave, but he refuses, choosing to fight Frank alone.

Lloyd Bridges (father of Jeff and Beau) plays Kane's callow deputy. Thomas Mitchell plays the cynical mayor of Hadleyville. Lon Chaney Jr. is the town's arthritic former marshal. Harry Morgan, who would later become a TV star on Dragnet and M*A*S*H, is a cowardly townsman. A young Lee Van Cleef (doing what he did best, i.e., playing villains in Westerns) appears as one of Miller's henchmen. And Ian MacDonald plays Frank Miller.

The screenplay (adapted from "The Tin Star", a short story by John Cunningham first published in Collier's magazine in 1947) was written by Carl Foreman, while he was under investigation by the House Un-American Activities Committee (and subsequently blacklisted in Hollywood) during the early-'50s Red Scare. The film has been interpreted by many as a parable about U.S. society in general, and U.S. intellectuals in particular, abandoning those summoned to appear before the committee.

High Noon was nominated for seven Academy Awards, winning for Best Actor (Cooper), Editing (Elmo Williams and Harry Gerstad), Original Score (Dimitri Tiomkin), and Original Song (Tiomkin and Ned Washington). It is also notable as the film most requested for viewing by the U.S. Presidents. Bill Clinton named it his favorite (allegedly having it screened in the White House a record 17 times), and Ronald Reagan and Dwight D. Eisenhower were also big fans.