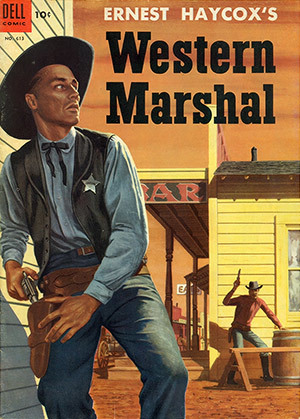 In most countries, a marshal is a high-ranking (or the highest-ranking) military officer. A United States Marshal, however, is a federal law enforcement officer, charged with apprehending fugitives from federal law, protecting the federal courts and ensuring the smooth function of the court system.

The United States Marshals Service was the first federal law enforcement agency created in the young U.S.A., in 1789. While its primary duty was to the judicial system, the Service also acted as the local-level representative of federal laws. For example, the Marshals took the census every ten years until 1870.

Marshals have the ability to deputize ordinary citizens (but not military personnel) at need, popularly known as "forming a posse." In films and television, many marshals' deputies are clueless, which will inevitably exasperate the marshal when he finds out. Sturgeon's Law strongly suggests that this happened in Real Life as well.

Since a marshal is directly responsible to the federal government, they're not as likely to be influenced by local politics as The Sheriff or a police chief. That said, many U.S. marshals have also been sheriffs or town marshals before or after their federal service.

Note that the difference between something like the FBI and the US Marshals is that the marshals are expected to go off into the wilderness, usually alone, take into custody and bring back to justice whoever they are sent after. It pretty much requires that you be a total badass. So while an FBI agent might or might not be a badass, a US Marshal always is - even if he looks like a nerd. Big duties assigned to the Marshals Service today include Witness Protection and prisoner transport across state lines; that said, a surprising number of them spend most of their time doing pretty mundane work like doing security at federal courthouses (manning the scanners that sprouted at the courthouse entryways after 9/11) and serving court papers and enforcing judgments on litigants in federal cases (if somebody sues you in federal court, and wins, and you refuse to just cut a check despite having plenty of stuff, it's a US Marshal who will be seizing your car or your house or your prize fancy cat to pay the judgment; if you don't have a lot of stuff but do have a steady income, it'll be the Marshals who arrange the garnishment).note Generally, anyway—some overworked Marshal's offices, like the one in the Western District of New York, have so much other stuff to do they don't touch civil satisfaction of judgment, instead leaving that to local sheriffs' offices. They are not, however, the Air Marshals assigned to flights to counter hijackings, which is a separate service entirely.

Marshal Strickland forces Buford Tannen to hand over his firearms.

Marshal Strickland forces Buford Tannen to hand over his firearms.