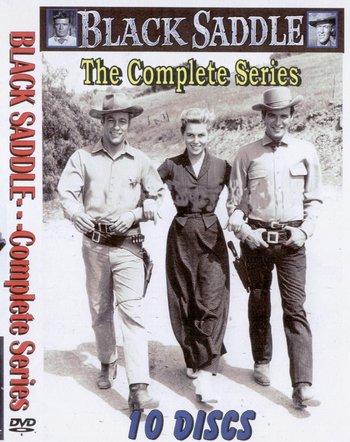 Black Saddle is an American Western television series starring Peter Breck that aired 44 episodes on NBC from January 10, 1959, to May 6, 1960.

Breck plays Clay Culhane, a gunfighter who becomes a lawyer after his brothers are killed in a shootout: a gunfight in which he himself was seriously injured, but survived. Realising that his life had to take a different direction, Clay hung up his gun and began to study the law. Based in the town of Latigo, New Mexico, Clay attempts to solve trouble through the law, but circumstances often force him to strap on his guns again. Other regulars include U.S. Marshal Gib Scott (Russell Johnson), a Reasonable Authority Figure who is suspicious of Clay, but generally gives him the benefit of the doubt, and Nora Travers (Anna-Lisa), who owns the hotel where Clay lives and who plays peacemaker between Calhune and Scott.