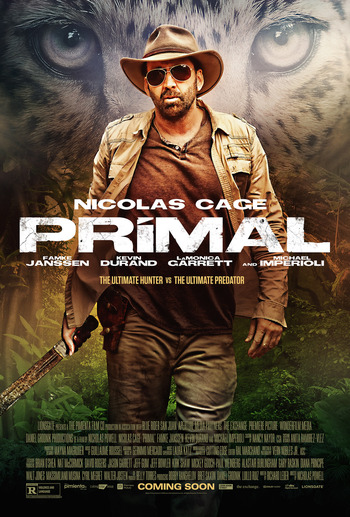 "You kill my cat, I'll blow your head off."
"The man that we're looking for is a mercenary assassin. A professional killer. He's armed and he's the most dangerous son of a bitch you'll ever get this close to."
— John Ringer
Advertisement:

Primal is a 2019 Action Thriller film directed by Nick Powell and starring Nicolas Cage, Famke Janssen, Kevin Durand, LaMonica Garrett, and Michael Imperioli. The film was shot in Puerto Rico and released in the United States on November 8, 2019.

Frank Walsh is a skilled big-game hunter specializing in rare and dangerous species. He has recently caught an extremely rare white jaguar in the rain forests of Brazil and now expects to sell it to a zoo for a fortune. Frank books a ship to deliver the jaguar along with other animals to the U.S. However, authorities also need the ship to transport a notorious killer who must be brought to trial, and who, for medical reasons, cannot be transported by plane. On the way to the U.S., the criminal frees himself and releases dangerous animals and venomous snakes.

Not to be confused with video game, animated series (wich was also released in 2019), or 2010 Australian horror film with which it shares its title.

"You might just be a good man after all."