Film / Portrait of a Lady on Fire 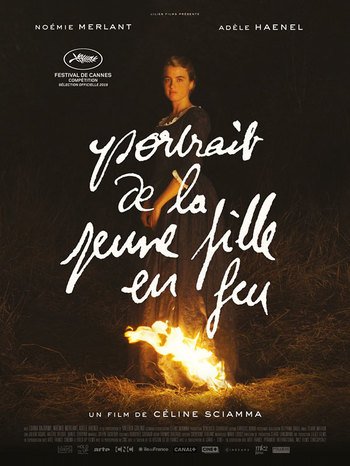 "When you don't know what to say, you touch your forehead. When you lose control, you raise your eyebrows...and when you're troubled, you breathe through your mouth."
— Héloïse, to Marianne
Advertisement:

At the end of the 18th century, young painter Marianne (Merlant) is commissioned to paint a portrait of a young woman to be used to elicit marriage proposals. Knowing that the woman, Héloïse (Haenel), has previously refused to sit for portraits as she does not want to be married, Marianne disguises herself as a lady's maid in order to gain her subject's trust only to find herself inadvertently falling in love with her.

Other notable characters include Héloïse's mother, an Italian widow who wishes to go back to Milan and hires Marianne, and Sophie, Héloïse's maid.

Portrait of a Lady on Fire contains examples of the following tropes: