Manga / Seraph of the End 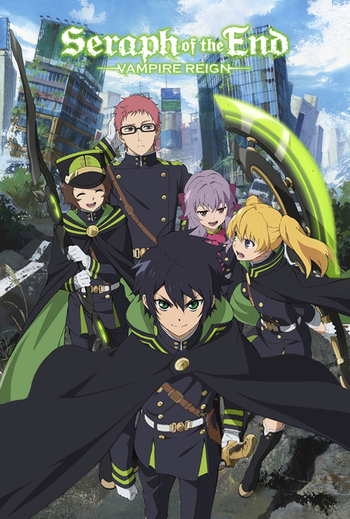 And so began the battle at the end of the world, between vampires, angels, demons... and us.
Advertisement:

Years ago, due to the Trumpets of Apocalypse, a lethal virus spreads across the world, wiping out most of humanity. Afterwards, the surviving humans are either terrorized by the Horsemen of Apocalypse monsters, which exist to kill humans only, or vampires, who emerged from their underground world after the Apocalypse to preserve and enslave what's left of humanity. Yūichirō Hyakuya and his fellow orphans at the Hyakuya orphanage are captured by the vampires and treated as livestock, only being allowed to live for their blood. Desperate for freedom, Yūichirō and his best friend Mikaela hatch a plan to escape with their family to the outside world, hopefully free from vampires—only for their attempts to end in tragedy. As the only one to make it out alive, Yūichirō aligns himself with the Japanese Imperial Demon Army (JIDA)—Japan's only hope against the vampires—in order to avenge his fallen friends.

Seraph of the End (Owari no Seraph) is a manga series written by both Takaya Kagami, author of The Legend of the Legendary Heroes and Itsuka Tenma no Kuro Usagi, and Daisuke Furuya. It is illustrated by Yamato Yamamoto, artist of Kure-nai, and began serialization in Jump Square in 2012. Viz Media began serializing the series as of October 2013 with the subtitle "Vampire Reign".

An anime adaptation by WIT Studio was announced on August 28, 2014. In December 2014, it was announced the series would run in two split cours (quarters of the year). The first cour aired in April as part of the Spring 2015 Anime season and the second cour aired in October as part of the Fall 2015 Anime season. In North America, the series was licensed by Funimation for streaming and home video release. Their English dub premiered in the U.K on Viceland, starting February 14, 2018.

Tropes associated with Seraph of the End:

The vampire nobles are also more powerful than ordinary vampires, especially the Progenitors, who are the leaders and most powerful of the vampires.