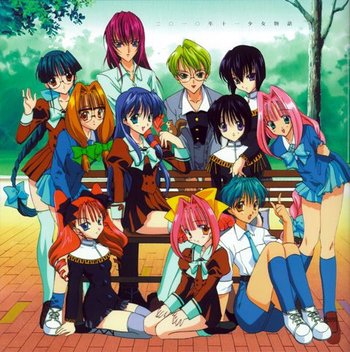 Seraphim Call is a 1999 anime series from the studio Sunrise, with character designs by Aoi Nanase. The anime takes the form of an anthology, telling the individual stories of eleven girls living in the then-future year of 2010 in the city-island of Neo-Acropolis. The anime is somewhat experimental, using different and sometimes unconventional storytelling techniques for each episode. For example, one episode has a fake ending, another is seen entirely from a stuffed toy's point of view, another features no other characters but the girl it's focusing on, etc.