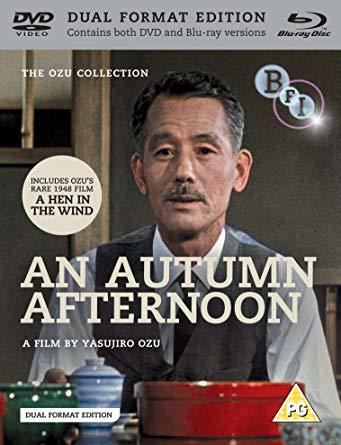 An Autumn Afternoon (Sanma no aji) is a 1962 Japanese film, the last film by director Yasujiro Ozu.

Shuhei Hirayama is a widower who lives in Tokyo with two of his three adult children: his daughter Michiko and his son Kazuo. He also has a married son, Koichi. His sons aren't doing all that great: Koichi hits his father up for loans and Kazuo is just generally lazy. With their mother apparently long deceased—it's strongly implied that she was killed in an American bombing raid during the war—Michiko is keeping house for her father and brother. Most of the plot revolves around Shuhei's growing worries that Michiko will never be able to marry since she spends all of her time taking care of him and Kazuo, worried that they couldn't take care of themselves.

Chishu Ryu, who was attached to Ozu via umbilical cord, stars as Shuhei. Ozu made several movies around the general premise of an aging father getting a daughter married off; compare his 1949 film Late Spring which is a more tragic take on the whole idea.