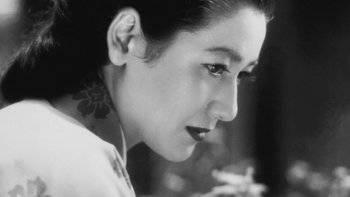 Shukichi (Ryu) is a professor and a widower. He lives alone with his only child, daughter Noriko (Hara), who is unmarried at the age of 27. Noriko keeps house for her father while he goes about his academic work. 27 years old is considered verging on Old Maid status in Japan, but Noriko has no real urge to get married and is content to live at home and look after her father. Noriko's Aunt Masa, however, wants her niece to get married before its too late. Masa approaches Shukichi and he agrees to get Noriko married off, even at the cost of his own happiness.

Compare another Ozu film, Early Summer (1951), which also starred Setsuko Hara as a character named Noriko (but not the same character), and has very similar story elements, with the Noriko character being pressured by her family into an undesired Arranged Marriage. And then there was Late Autumn (1960)—seriously, Ozu was into Theme Naming—which also starred Setsuko Hara, and was a remake of this film, but with Hara playing the role of the parent instead. And then there was An Autumn Afternoon—we weren't kidding about the Theme Naming—which had a similar premise but wasn't so negative about the idea of the marriage.