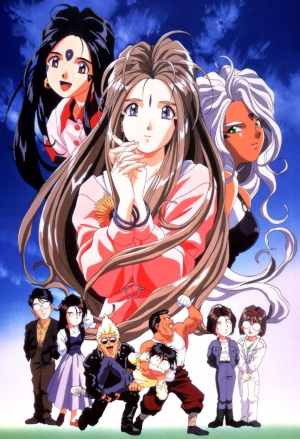 Ah! My Goddess is a long-running manga by Kosuke Fujishima that tells the romantic yet comedic story of Keiichi Morisato, a short fellow with low self-esteem studying engineering in college, and the three Norse goddesses who move in with him. Because he is a genuinely good person, the sweet and beautiful Belldandy, Norn of the Present, is sent by "The Goddess Relief Agency"† "Goddess Help Line" in some translations in Heaven to grant him a wish. Keiichi, convinced he's being set up for a practical joke by the upperclassmen in his dorm, wishes that a girl just like her would stay with him forever.

From there, Keiichi and Belldandy enter into a very sweet, very low-key romance, but then Belldandy's sultry elder sister Urd (the Norn of the Past) shows up, irritated because they haven't moved faster and into more advanced levels of intimacy. Then their kid sister Skuld (the Norn of the Future) appears, convinced that Keiichi is no good for her big sister and seeking to sabotage the relationship. Matters are further complicated by Keiichi's sister Megumi (who in the grand tradition of Bewitched knows nothing about the supernatural nature of the sisters); the demoness Mara, who has a grudge against the goddesses; and a large cast of additional supporting characters from Heaven, Hell, and the student body of the Nekomi Institute of Technology, where Keiichi attends classes.

Beginning serialization in Kodansha's Afternoon manga anthology in November 1988, Ah! My Goddess (or Oh My Goddess! depending on which part of the franchise it is) combines the finest elements of America's 1960's "supernatural sitcoms" with a tender and sweet love story… and no small amount of both lighthearted slapstick comedy and intense drama. True to its roots, the series has a noticeably subdued use of Fanservice compared to other Bishoujo Series. The innocent nature of the series make it receivable to a much wider audience (particularly a younger audience) than regular Seinen. It was also the first exposure many anime fans in the West had to the Yamato Nadeshiko archetype.

The series spawned numerous adaptations over its long life, including a five-episode OVA series in the mid-1990s (which this entry was originally written for – it's the source of the page image), a motion picture, and a Gag Series called The Adventures of Mini-Goddess. This was followed much later by two season-long TV series that more faithfully adapted early manga material – the first began in late 2004; the second, "Flights Of Fancy"†  (that's its international title; the original Japanese subtitle is Sorezore wo Tsubasa or "Everyone Has Wings") began in 2006 and is a direct continuation of the first season. Those were followed by a 2-episode TV special to celebrate the franchise's 20th anniversary called "Fighting Wings". A new "OAD" (Original Animation DVD) called "Itsumo Futari de" was released in 2009 and bundled with Volume 42 in Japan.

In The New '10s, the manga's tone suddenly shifted, fuelling speculation from fans that the series was heading towards a conclusion. Sure enough, in April 2014, Fujishima ended Goddess after 25½ years of serialization, spanning 48 books and 308 chapters.

Most of this franchise has found its way to the West, where it has garnered a loyal fanbase. Dark Horse Comics publishes a well-regarded translation of the manga, which is notable for being the longest-running English-language manga (by timespan), beginning in 1994 and lasting twenty-one years. The OVA series was released in North America by AnimEigo. The Movie and Mini-Goddess were handled by Geneon (then known as Pioneer). The first season of the TV series was licensed by Media Blasters, but ADV Films licensed the second – both seasons use the same dub cast, though. The manga is still in-print – Dark Horse began reprinting the series in omnibus volumes in 2016 after finishing the original run at the end of 2015. However, the rights to the various anime adaptations have all lapsed and the series are out-of-print.

Not to be confused with Ah My Buddha, though that show's rights-holders would like you to be.

A new spin-off manga that takes place after the end of the events of the original series has been announced. It will be called Ah! My Job-Hunting Goddess, it will be about Belldandy having to find a job due to a recession. Its scheduled to premier in the March 2019 issue of Kodansha Monthly Afternoon magazine.