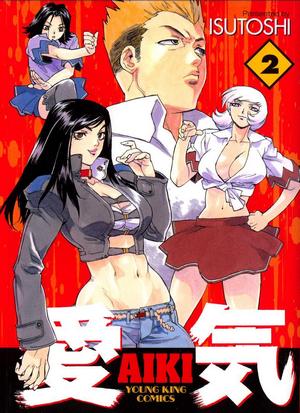 AIKI is a Seinen action manga, written and drawn by Isutoshi, which was serialized in Young King from 2004 to 2012. Isutoshi is an artist mostly known for doing H-manga; however, as the series progresses, the manga tilts more towards martial arts and comedy and less towards the ecchi side (though a good amount of Fanservice still remains).

The story features Kunitoshi Joukyuu, a young martial artist who is so strong that his father/teacher actually dislocated (and then relocated) all of his joints within one night just so he would only be able to access half of his power, in an attempt to teach him either humility or creativity. Even so, he constantly wipes the floor with the competition, to the point where a couple of muscular female teachers beg him to train their "mistress": a small, raven-haired girl named Kizuki . While Kizuki knows a decent amount of Aikido on her own, she's the granddaughter of the chairman of the school board and a high-value target because of the school's politics.

Of course, it doesn't help that most of Juzenji High School is out to defeat Kizuki, or that Joukyuu's scantily-clad, female cousin Miu Takatori (who's the principal's daughter and Kizuki's main opponent for control of the school) is trying to recruit him by any means necessary. Not to mention that Joukyuu himself is a Jerkass pervert who constantly arranges for his students to be thrown into dangerous situations and may be the worst role model ever. Despite all this, Joukyuu grudgingly trains a growing group of women into skilled martial artists while battling a Sorting Algorithm of Evil as he looks for a way to regain his previous strength.

In short, think of AIKI as a much more lewd and evil version of Kenichi: The Mightiest Disciple.

Isutoshi drew a sequel called AIKI-S, which sees Joukyuu go to the United States with his "first disciple" Akemi Kageyasu and his former enemy Veronica Yuminowa to compete in a mysterious tournament. It ran from 2013 to 2018.