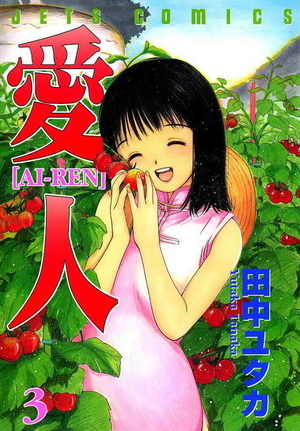 Ai-Ren is a manga by Tanaka Yutaka chronicling the last days of our hero Yoshizumi Ikuru.

In the not too distant future, the world has just recovered from a conflict that nearly ended it, and humanity is slowly becoming extinct. All this takes a back seat to the story of Ikuru.

Several years ago, Ikuru and his family had been in a grievous accident (of which he was the sole survivor) and the only way to save him was to transplant a significant amount of parts from someone else. While this was done to save his life, it turned out that in the long run, these transplanted parts were actually killing him gradually.

Thus we come to our hero, who at the story's start comes to terms with his mortality and orders a companion for him to live out his last days in relative comfort - an artificially-created girl who Ikuru names Ai. Ai gives Ikuru's remaining days a surprising amount of meaning - running him through a veritable emotional roller coaster.

This manga is a Slice of Life story set in a dystopian world, which shows off the contrasts between Ikuru and Ai's existence with the state of the world they live in. While the setting is admittedly bleak, many things (Ikuru and Ai's relationship is a significant one) show that even in mankind's darkest hour, meaning can be found amidst the end... and The Power of Love can be miraculous.

All that aside, this is a wonderful manga series that will probably never get as wide an audience as it should, because of its seinen aspects, foremost of which is Ikuru and Ai consummating their relationship, among other, smaller things.

Troper's Note: Because up to now there has been no official English translation of Ai-Ren, all quoted lines are from the Solaris-SVU fan translation.