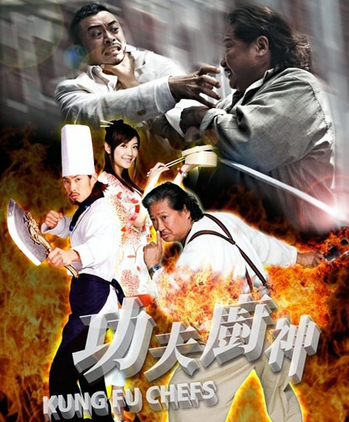 Their knives aren't just for siu mei.
"I'll show you 'mere cook' after I fillet each and every last one of you bastards!"
— Sanji, One Piece
Advertisement:

Do you really want to mess with someone who knows where the knives are?

A Lethal Chef is someone whose cooking is so terrible that it could fall under the Geneva Convention as an inhumane weapon. A Supreme Chef is a superb cook, particularly the kind that participate in televised Cooking Duels where "every battle, reputations are put on the line."

Combine the lethal potential with sublime cooking skills and you get the Chef of Iron: a fighting cook, someone who can kick your ass and prepare a gourmet meal with equal ease. They are a bad person to have as an enemy but a good person to have invite you over to dinner.

Chefs of Iron fall into different, frequently overlapping types, not limited to:

Not to be confused with a certain culinary contest, in case you didn't bother checking out that pothole above.

Soulffle attacks Luigi after he interrupts his cooking, and puts up far more of a fight than the other ghosts on his floor.

Soulffle attacks Luigi after he interrupts his cooking, and puts up far more of a fight than the other ghosts on his floor.