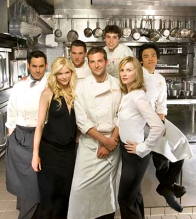 An adaptation of Anthony Bourdain's professional memoir and a behind-the-scenes look at restaurant kitchens, this Work Com looked at the goings-on in the kitchen of a fancy Manhattan restaurant. The cast of characters includes two literary references: Jack's Lancer is Stephen Daedalus, while his great rival, a woman chef, is Becky Sharp.

The television series debuted on September 19, 2005 on Fox. Bradley Cooper played the Anthony Bourdain-like lead character, Jack Bourdain. The show's first two episodes did not earn strong ratings, and its run was then interrupted by Fox's coverage of the Major League Baseball playoffs. On November 11, 2005, Fox announced only 13 episodes would be produced. Four days after the fourth episode aired to dismal ratings on December 5, 2005, Fox cancelled the series outright. Considered Screwed by the Network. Can be found on DVD and on Hulu.