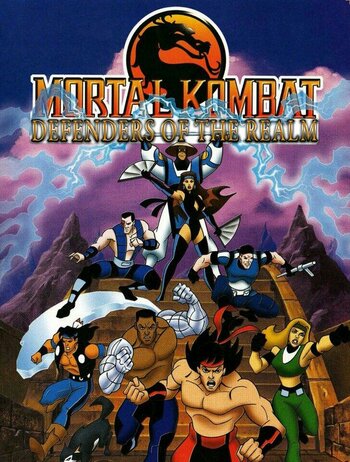 "Much has changed since the last Mortal Kombat tournament. Dark forces of Outworld have begun invading the Earthrealm. These attacks are seriously weakening Earth's dimensional fabric, enabling not only Outworlders to enter the Earthrealm, but warriors from other domains as well. Only the most extraordinary warriors can possibly meet this challenge: Liu Kang, Princess Kitana, Sub-Zero, Jax, Sonya Blade, Nightwolf, Kiva, Kurtis Stryker. Driven by purpose and bound by honor, these are the Defenders of the Realm."
— Raiden's Opening Narration
Advertisement:

Mortal Kombat: Defenders of the Realm, also known as Mortal Kombat: The Animated Series, is an Animated Adaptation of the Mortal Kombat games. It aired on the USA Network's USA Action Extreme Team animation block from September to December 1996.

Defenders of the Realm follows the events of the first live-action movie. Raiden once again gathers a group of warriors to stand against the forces of the Outworld and various other invading dimensions. The series also introduced a handful of characters, one of whom, Quan Chi, was later a mainstay in the Fighting Games.