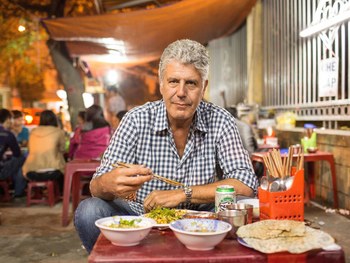 Anthony Michael Bourdain (June 25, 1956 - June 8, 2018) was a New Jersey-born American writer, chef, and television personality. He cheerily promoted the image of a proud, sarcastic Jerkass on all his appearances. Beyond his surface, though, he could be very deep and profound, almost philosophical in his writings and monologues.

If there was a real-life Mr. Vice Guy, he'd be the poster boy, being a former drug and cigarette addict and to his death a huge drinker as well as a Punk Rock fan. A famous chef within cooking circles for years, he grew celebrity level of fame with his 2000 book Kitchen Confidential, which is a dark, autobiographical look at the cooking industry from the inside. Ironically, the book was filled with hatred and Take Thats at other celebrity chefs. His works and appearances were also very trope- and clique-savvy and often hung lampshades on the tropes that happen in real life within the shows he was on.

On June 8, 2018, Bourdain was found dead in a hotel room of an apparent suicide by hanging while filming an episode in Strasbourg, France for Anthony Bourdain: Parts Unknown. In 2021, the documentary Roadrunner: A Film About Anthony Bourdain chronicling Bourdain's life and career were released. While praised for its portrayal of Bourdain, it also caused some controversy over its use of artificial intelligence technology to reproduce his voice for some audio clips.

Tropes associated with the man and his work: