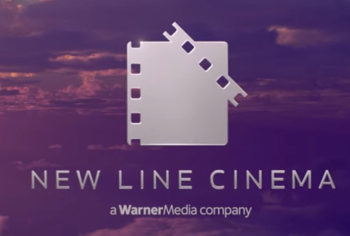 Give it up for the film reels, ladies and gentlemen.
Advertisement:

New Line Cinema is a film studio owned by Warner Bros. Discovery. It is a subsidiary of Warner Bros. since 2008.

The studio got its start in 1967, built by Robert Shaye to show foreign and art films to college campuses in America. The studio started off by releasing several classic foreign films, as well as the works of John Waters. Before long, it finally got to make its own film, Stunts in 1976; it was released in 1977 to critical apathy but marginal financial success.

The '80s started off as usual for New Line Cinema. It made a number of horror flicks (such as the original Evil Dead), kept releasing foreign and art movies, and got hit hard with a financial dearth. It finally managed to strike gold in 1984, when it distributed A Nightmare on Elm Street, which managed to be an instant success, no doubt helped by its minuscule budget (leading to NLC's nickname, "The House That Freddy Built"). In the following years, New Line Cinema kept hitting hard with horror films and other fare. For a time in the early 1990s, NLC and Carolco Pictures had a joint venture called Seven Arts (not to be confused with several other companies that went under that name, including one that eventually became part of Warner Bros.), which primarily released a mix of Carolco's lower-budget films and some arthouse pictures. It didn't last too long and it was gone by 1993 (these films are mostly owned by StudioCanal these days as part of the Carolco library they acquired).

In 1994, New Line was purchased by Turner Broadcasting, and began distributing some of Turner's in-house theatrical productions (under the banner of Turner Pictures) in theaters (home video releases were under Turner's own home video arm {which also assumed distribution for New Line Home Video titles from Columbia TriStar Home Video, who'd been distributing a majority of NLC titles on VHS since the mid 80s} and lacked any NLC references); Turner itself was bought out by Time Warner two years later. At first, it was kept separate from the company's other studio subsidiaries (sister studio Castle Rock Entertainment was run as part of Warner Bros. starting in 1999).

New Line's 2004-2008 filmography was practically a non-stop litany of box-office disappointments. With the exception of The Butterfly Effect, Wedding Crashers, and Hairspray, New Line couldn't turn a profit post-Return of the King. Once The Golden Compass tanked in the U.S., it was decided that they would merge with Warner Bros., which became official in 2008. New Line lingers on as a subsidiary of WB's feature film division, though some former New Line executives, most prominently Toby Emmerich and Walter Hamada, have run either WB itself or some subsidiaries such as DC Films.

The studio also ran arthouse division Fine Line Features from 1990 until 2005, when it was replaced by Picturehouse, a collaboration with sister company HBO, but it didn't last long before the WB merger killed it off, along with WB's own arthouse division, Warner Independent Pictures. However, Picturehouse would later be relaunched in 2013 independently of WB.