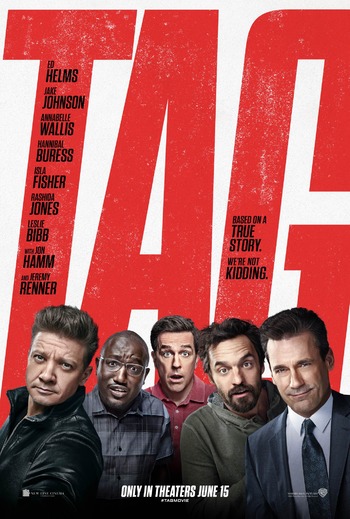 "This game has given us a reason to be in each other's lives."
"For the entire month of May every year we play tag, and you never know when someone’s going to pop up. Our buddy, Jerry, he’s the best that ever played, and now he wants to retire. This is the year we get Jerry."
— Hogan "Hoagie" Malloy
Advertisement:

The story revolves around a group of five childhood friends who are engaged in a decades-long game of Tag. Each goes to absurd lengths to catch his friends by surprise and practically no time or place is off limits. They are thrown for a loop, however, when they hear that the fifth member of their group, who has never been tagged, might not be interested in playing the game anymore.

Tag contains examples of the following: