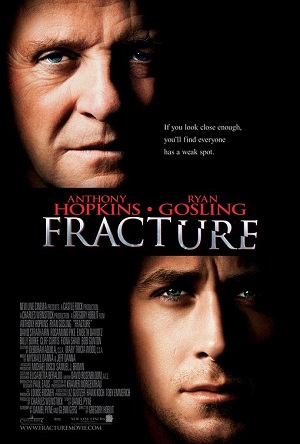 "I killed my wife... Prove it.
Advertisement:

Fracture" is a 2007 thriller, directed by Gregory Hoblit and starring Anthony Hopkins and Ryan Gosling.

Ted Crawford (Hopkins) is a brilliant and wealthy aeronautical engineer who discovers that his wife, Jennifer, is having an affair. He orchestrates her murder and arranges to be arrested by the same cop whom his wife was having an affair with. The wife survives but remains in a coma, while Crawford is charged with attempted murder. When the case is presented to deputy district attorney William Beachum (Gosling), who is about to leave his job as a public prosecutor for a high-profile post at a respected legal firm, the case looks like a clear slam-and-dunk with a murder weapon and a signed confession, and the confident Beachum barely investigates the case.

However, Crawford elects to represent himself at his own trial, and soon presents evidence which reveals that the cop who arrested and interrogated Crawford was screwing his wife behind his back, making Crawford's signed confession inadmissable in court as fruit of the poisonous tree

since it was obtained under duress. On top of that, the murder weapon turns out to be useless due to a clever switcheroo that Crawford performed during the arrest. Beachum sees his life crash around him due to his own hubris and a murderer walks free, as he desperately tries to find another way to put Crawford behind bars.