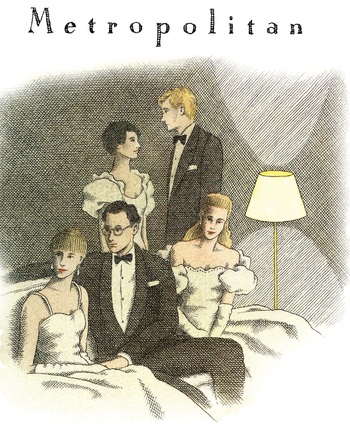 Metropolitan is a 1990 comedy, marking the directorial debut of Whit Stillman, who also wrote and produced it.

Tom (Edward Clements) is a college student and self-proclaimed Socialist spending his Christmas break at his mother's Manhattan apartment. A misunderstanding over a taxi cab results in a chance invitation to a party held by a close-knit group of wealthy young people, the SFRP (Sally Fowler Rat Pack, named for the member at whose apartment they gather). Tom gradually becomes an accepted part of the circle, forging friendships with brash Nick (Chris Eigeman) and sensitive Charlie (Taylor Nichols). He also becomes attracted to Audrey (Carolyn Farina), the group's resident Ingenue, who happens to be a former classmate of his crush Serena. But as everyone begins their journey into adulthood, the SFRP seems to be on the verge of breaking up, as everyone realizes their rarified social world may be on its last legs.