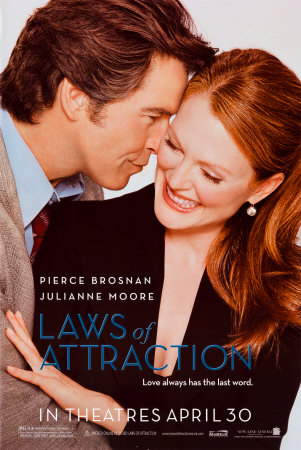 Laws of Attraction is a 2004 Romantic Comedy film starring Pierce Brosnan and Julianne Moore as top divorce attorneys who go head-to-head in some of the most high-profile divorce cases in the country. Along the way much Belligerent Sexual Tension is had, Slap-Slap-Kiss ensues, and an Accidental Marriage becomes a real one.

Okay, to be more precise:

Audrey Woods (Moore) is the best divorce attorney in the state of New York. She knows it. The rest of the New York bar knows it. And the high-profile celebs and athletes who want a divorce this week know it.

Enter Daniel Rafferty (Brosnan), a Bunny-Ears Lawyer who has just come back from California to resume practicing in New York, whereupon he makes his office above a little food shop in Chinatown. He rubs Audrey in all the wrong ways... except, of course, when he's rubbing her in all the right ones.

Time and time again they find themselves as opposing counsel in high-profile divorce cases, until one case requires them to go to Ireland to evaluate the couple's castle and see who gets it in the settlement. While they're there they attend a local festival and get smashing drunk, whereupon they get married.

Once back in the States, they decide to make a go of the whole marriage thing - in order to keep up appearances, you know - and it goes along fairly swimmingly... until Daniel drags their personal life into their professional one and brings up something he shouldn't have known in the middle of the case, where the whole thing falls apart.

Will Daniel and Audrey make up? Can she ever forgive him? Will they actually get married, since that festival marriage wasn't legal after all?

What do you think?

While not particularly memorable, it's a cute little comedy, and Brosnan and Moore are seasoned enough actors to make it believable.

These Tropes Are Employed: