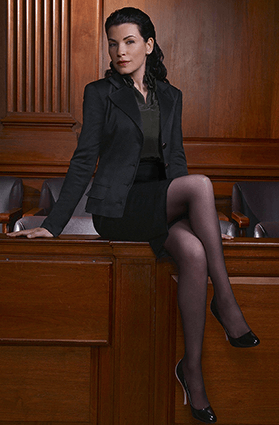 She can habeas my corpus any day.
"Single Female Lawyer
fighting for her client!
Wearing sexy miniskirts
and being self-reliant!"
— Futurama
Advertisement:

She wears stiletto heels, favors form-fitting outfits with low-cut tops and hemlines well above the knee, has a sexy voice and demeanor, and can turn the head of many a man or woman. She also charges six hundred dollars an hour and doesn't care who her clients are, just as long as they pay.

No, she's not a prostitute; she's a lawyer. (Same difference, right? But we kid, we kid.)

This is basically about sexy lawyers, judges, etc. Usually (though by no means always) female, such portrayals may be seen to constitute blatant Fanservice, although they're sometimes justified in-universe (and in Real Life) as a case of lawyers using their sex appeal to help woo clients or sway juries. While this type of character can be either a Crusading Lawyer or an Amoral Attorney, the former is more likely.

Similar to Hospital Hottie and/or Hot Scientist. Can be a Head-Turning Beauty. Compare Hot Librarian (especially in visual appearance). See also Inherently Attractive Profession when the job of being a lawyer is also considered attractive.