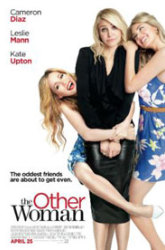 The oddest friends are about to get even.
Advertisement:

The Other Woman is a 2014 Comedy-Drama film starring Cameron Diaz, Leslie Mann and Kate Upton.

New York City lawyer Carly Whitten (Diaz) starts a relationship with the handsome businessman Mark King (Nikolaj Coster-Waldau), only to discover that he is already married to Kate (Mann). Carly and Kate, initially mutually horrified to find out about each other form an unlikely friendship, later joined by Mark's other mistress Amber (Upton). Even as they learn that he constantly and shamelessly flirts with every attractive woman he meets, they also discover he's committing international fraud in his wife's name, warping the ideas that she gave him, which could result in her going to jail rather than him.

Working together, they plan on getting even by utterly humiliating him.

Not to be confused with the Natalie Portman film, The Other Woman (2009).