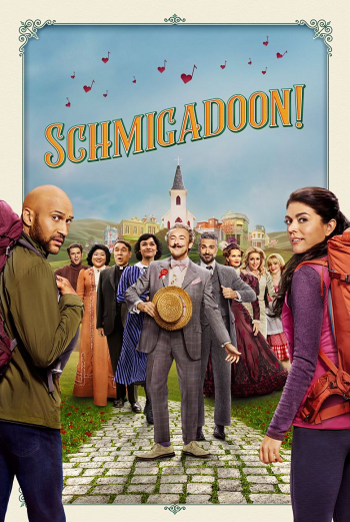 "Romance in musicals isn't always logical. That's why they usually let the songs do the heavy lifting."
"Once ye have entered Schmigadoon
'Tis true, ye won't be leaving soon
Within its borders ye are bound
Until at last true love ye found
But till ye find it, ye must stay
Where's life's a musical every day!"
— The Leprechaun, "Leprechaun Song"
Advertisement:

Schmigadoon! is a musical-comedy series developed by Cinco Paul and Ken Daurio (Despicable Me) for Apple TV+. Barry Sonnenfeld (A Series of Unfortunate Events, Men in Black) directed the first season and executive produces.

Doctors Josh (Keegan-Michael Key) and Melissa (Cecily Strong)'s four-year-long relationship is faltering. While on a hike, they stumble upon the mysterious town of Schmigadoon, which appears to be in a perpetual Golden Age musical productionnote (think Rodgers and Hammerstein or Lerner and Loewe). While there, they meet a host of colorful theatrical archetypes — the friendly mayor Aloysius Menlove (Alan Cumming), the hapless reverend Howard Layton (Fred Armisen) and his imperious wife Mildred (Kristin Chenoweth), local "bad boy" Danny Bailey (Aaron Tveit), perky Farmer's Daughter Betsy (Dove Cameron), gentle schoolmarm Emma Tate (Ariana DeBose), and intelligent but old-fashioned Doc Lopez (Jaime Camil). However, they're soon informed by a Leprechaun (Martin Short) that they cannot leave Schmigadoon until they find true love...

The show premiered in July 2021. Season 2 was confirmed

in June 2022, with Tituss Burgess and Patrick Page being added to the cast as Josh and Melissa find themselves in the world of Schmicago, the time of 60s and 70s-era musicals.

The countess's car is so stationary that she can afford to take a break to have a whole musical number.

Example of:
Driving a Desk

The countess's car is so stationary that she can afford to take a break to have a whole musical number.