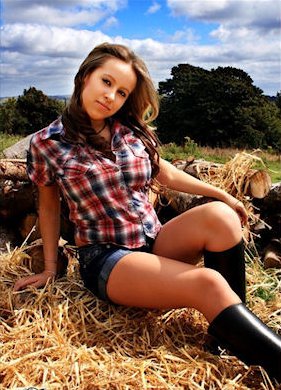 Ah just can't figure out why dem city fellers wanna stay at mah daddy's farm 'stead of dat nice hotel down the road.
"Cuz just when I thought it couldn't get no hotter
I caught a glimpse of the farmer's daughter..."
— Rodney Atkins, "Farmer's Daughter"
Advertisement:

A Farmer's Daughter is an innocent looking girl, typically from rural settings. In the United States this area tends to be in Midwestern America, the Deep South, or Sweet Home Alabama, but the archetype can be found in European stories as well. They typically dress in short sundresses or (gingham) halter tops and "Daisy Duke" shorts, and either wear cowboy boots or go barefoot. Sometimes an Unkempt Beauty, but She Cleans Up Nicely. They will often have a very pronounced Dixie accent and be very tomboyish and aggressive. They're typically pretty handy with tools and heavy machinery, among other things, having to repair tractors and such from childhood. Oh, and Girlish Pigtails aren't unheard of among them.

Farmer's Daughters are usually kept at home under very strict rules and supposedly know very little about the "ways of the world" - or at least pretend they don't - and therefore tend to be overly curious about sex. Watch out, though; their pops will have a shotgun and will use it if you try anything funny with them, like for instance a Roll in the Hay with them. And if she's knocked up? Shotgun Wedding time! Often they'll be a bit ditzy or backward; but even more often they'll be a lot smarter than they look. There are two clear types: One who is drop-dead gorgeous (but, almost but not quite paradoxically, in a Girl Next Door kind of way); the other has an okay body... but her face... (and she is usually the more aggressive type). Often used in Country Mouse settings. Also tends to be the downfall of the Traveling Salesman.

Given her background, she could very easily be the Distaff Counterpart to the Farm Boy… but she ain’t. (However, Overalls and Gingham is another matter).

This is known as a Western trope, but is also common in some Asian countries. Japanese examples are rare, but do exist. It's Older Than Steam, as many a novel and poem from the Middle Ages was about knights falling in love with a rural peasant girl. See also the Cowgirl sub-type in Cowboy.